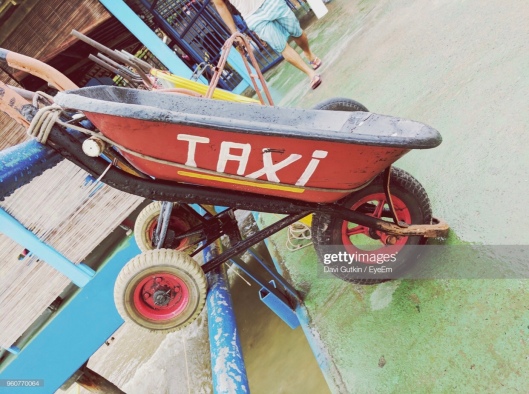 She thought she needed it

To take some load off her back

Transport supplies and tools and rice that’s more than a sack!

One with a powerful motor preferably

For jobs that are heavy duty

Great for carrying loads up slopes,

Be careful especially when you got the one you eloped with.

And there one was lying on the freeway,

Woken up from auto pilot mode

A wheelbarrow, yes right here left on the road!

Hard swerve to the left I did,

It may have been metal, plastic or wood

I believed it could cause some damage

And if I hd hit it, it most certainly would!

Relief I felt when I avoided it

Squished between a pick up truck and a raging sports car,

No other way but to go right over it,

Braced myself, prayed and hoped damage won’t cost a quid.

Watched it in my rear view mirror

The mighty Mini all 12 volts and just enough force

Shredded the thing to pieces beaten to a pulp.

A wood pulp it had been,

Don’t take with nitroglycerin, it ain’t that kind of gelatin!

Think it will be in my parmesan cheese?

While the list goes on, don’t even sweat it, it will be for the greener good,

Anyways, it’s only cellulose, according to snopes,

It won’t you leave you with extra kilos or worse, comatose!

We were all fine,

Me, myself and my Mini

Thankfully we both shimmied our way.

Pray next time it won’t be a sleigh!

7 thoughts on “When An Alternative Transportation Found Me”