I have been coming and going to Union Station everyday and had it not been for my Westways (from AAA – an auto club) magazine (and a client’s call that Union Station was featured in it) announcing the station’s celebration of its 75th Anniversary, it would have remained unbeknownst to me.

For weeks now, I did notice, though, changes at the station. Polished, shiny (almost slippery-looking) floors. Even the framed pictures/posters on the walls along the long corridor have been put up as well. Billboard schedule has been digitized too. Better and clearer signage.

Or so I thought.

There is always somebody, probably first-timers at Union Station, always looking confused and looking for a missing platform number. It is misleading for most, I guess. Take a look at this picture: 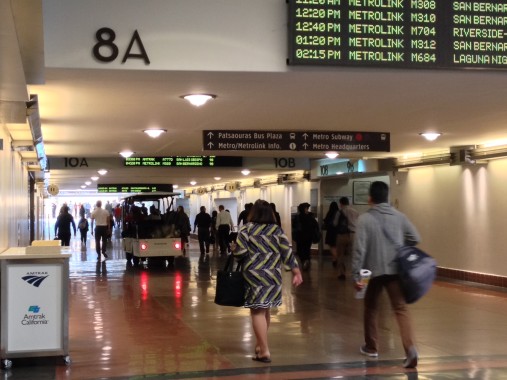 If coming from the other direction, one will see the “missing” number (9A and/or 9B).

I got confused, too, the first time it was put up. Walking down the corridor while looking at the numbers from afar, I thought, “Oh no! They’ve changed the numbering of the platforms! What platform number does my train go on now?” I got to the usual place and sure enough, I looked the other way — Voila! There it is! The missing number!

The station has also erected a “power column” as what I call it.

I believe they dubbed it as the “Tower” (the sign says, “Let’s Meet at the Tower”)

The Tower, not only serves as a landmark, is also an information center. It invites one to touch the screen and help with any questions you may have.

Another eye-catching is the red-coated staff located on each end of the station. He can answer questions like where to board the train, where to buy tickets, etc.

Which one would you prefer?  The Info Tower or Helpful and Friendly Danny?

Based on my observation for about 20 minutes, young people (teenagers and couples) prefer the Tower while older people and groups tend to approach Danny.

Aside from the stores (Starbucks, convenience store Famima! Ben & Jerry’s ice cream, Wetzel Pretzel, See’s Candies) inside the station, it also boasts of an aquarium which is a very good distraction especially for those with kids.

The station also has bus connections, train connections to Metrolink, Amtrak, and the Metro Red and Purple Lines.

If you’re planning to go to the station for the first time or just curious what it looks like, please take a moment to check out the pictures on the Gallery.

Congratulations on 75 years of service!

Big changes, I expect to see more of, from Union Station in the future, I hope.

2 thoughts on “Tribute to Union Station”